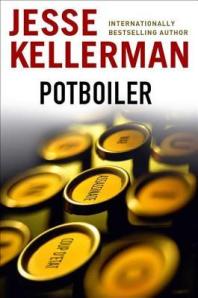 Twice this week I’ve read a book in one sitting, and both books came from the same DNA. The first was the newest Alex Delaware book by Jonathan Kellerman; the second was written by his son, Jesse Kellerman.

This novel, ‘Potboiler,’ is a strange twist on a post-Cold War spy novel, combining the intrigue of conspiracy theory and fancy techno-gadgets with the annoying literary babble of academia.
The story opens with the death of a famous writer, and his long-time friend, our narrator, attending his memorial service. Arthur then discovers that an unfinished, unread manuscript has been left behind, and he takes it. Unable to resist temptation, Arthur edits it a bit, and publishes this as his own; it becomes a bestseller, and he soon discovers lots of things he did not know about his dear departed friend Bill. For example: he’s a spy, and his novels are carefully coded to give instructions to agents around the world. By changing his last book, Arthur has messed things up, and now must either go to work for The Boys, or pay the price.
With character names I can’t spell, let alone pronounce, a fictional communist country divided over the burial place of a hero from their national poem, and lots of root vegetables, I was drawn in by the story, and yet had occasion to laugh. James Bond would never glue his false mustache on upside down; then again, Bond wouldn’t need a false mustache!
I will be looking forward to the next book from Mr. Kellerman, and checking every “beach read” from now on for spy code, just in case.