I woke up Thursday morning and, for the first time in weeks, I wasn’t in pain. Well, the small aches and pains that are always here were still there, but the massive pain that has had my neck and shoulders in it’s grip was gone. I honestly did not know what to do! Most people – normal people – would have used their day to actually do something, but that’s not how I roll. I spent my pain-free day curled up in my chair, reading. Same as always.  At least now I know that the pain can be alleviated; the day before, my sister Jolene had massaged my shoulders for a bit, nearly bringing me to tears, and then she sent me to bed with the heating pad. It worked (thanks, Butch!), and I can only wonder what a session from an actual  masseuse would do for me! Checking out deals on Groupon ASAP…

Things are stalled a bit, partially because of money, partially because I’ve been feeling so lousy, and partially because I just put stuff off. Big surprise. It amazes me that I once had a busy life, a full -time job, a home of my own, even a social life, and managed it all! Right now I am just proud that I’ve been able to keep my room clean for two weeks in a row; managing more than that is scary. However, I am working on doing more, both here, in the house (which is actually harder than going outside) and out. Still haven’t started my yoga class, but that is next, as is following through on my promise to Jolene to help with dinner twice a week. I can do this, right?

What I cannot do is get Miss Google to be nice to the new kitten. They antagonize each other, and every time Honey comes too close, Miss G goes on full alert, hissing and growling. She’s even swatted Honey a time or two, but the kitten doesn’t care. She’s either a masochist, or she really really wants to be friends, because she keeps coming into Miss G’s territory, getting in her face. At this rate, I may have to call in the cat whisperer. 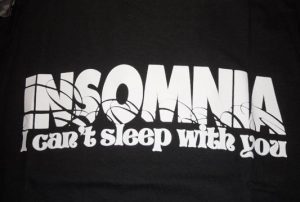 I really should be in bed. Instead I’m sitting in the living room, watching ‘The Late Late Show with Craig Ferguson’ and writing. I haven’t been sleeping well lately. So, I apologize if I begin to ramble. Sleep deprivation will do that to you!

Insomnia isn’t a new thing for me–it started way back at the dawn of time, when I was in high school. Always the same pattern. I fall asleep easily enough, and sleep well for a few hours. Then, usually about 2:30 a.m., I wake up, needing to pee, and after that, I’m awake for hours.
Sometimes I’ll be able to fall back asleep for an hour or two, but my twitchy feet usually watch me back up.
Oh, yeah, did I mention I have RLS? Restless Leg Syndrome. It’s a pain is the ass (or rather, legs) neurological condition that causes a tickling feeling in the legs or in my case, the bottoms of my feet. It makes my legs jerk so hard sometimes that I kick like a horse! Nobody is really sure what causes it, but we do know that many things make it worse; among these are the anti-seizure medication that I’m on. Yep. Finally found a med which will control my seizures (whoo–hoo!), and it makes my feet go crazy, causing an increase in insomnia. Wouldn’t you know, lack of sleep is a BIG trigger for me & seizures…
Anyway.
I’ve tried all sorts of insomnia remedies: medication, bedtime yoga, Sleepytime tea, self-hypnosis, melatonin & Valerian, and a white noise machine. Not many have been successful for long. I’ve heard all the advice, and have tried most of it, to little avail. I simply don’t sleep.
I’ve also tried many many remedies for RLS, most of them home remedies found online. So far none have worked for long. I’ve taken magnesium citrate before bed; I’ve rubbed my legs & lower back down with apple cider vinegar; I’ve done a series of strange exercises in the dark. The thing that worked the best was eliminating caffeine & sugar from my diet, which I did to get rid of migraines. Discovered it helped the feet. Of course, now I’m back on the coffee wagon, (or did I fall off the wagon?), so I may have to fix that… I do know there are a couple of medications available for RLS, but so far, I haven’t tried them. Didn’t want to add one more med to my already large collection. If things don’t improve, I may change my mind.
There was a time when I’d get out of bed and clean my apartment in the middle of the night, but those days are gone. (We have neighbors here who are very sensitive to noise, and even running water after ten seems to annoy them, so no more scrubbing the bathroom or rearranging kitchen cabinets!) Some nights I turn on my bedside lamp, pick up my book and read; other night I get online and discover strange new blogs. Most nights I simply lie in the dark, listening to the fake ocean sounds from the white noise machine, trying to count backward from one hundred, as I take deep, even breaths, and hope I’ll relax enough to to fall asleep again.
Tonight I’m going to finish watching Craig Ferguson, then stay up as late as I can, in hopes that I can reset my inner alarm clock a little, or at least throw it off balance. And then, with any luck, I’ll get some sleep, dammit! 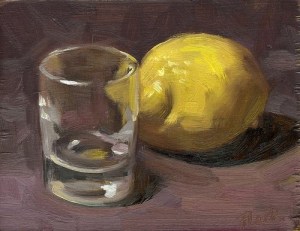 I have to say, I’m not sorry 2010 is over. In many ways, that year sucked, big time.
I spent most of the year in pain with migraines, and various other things. As well, money was nearly non-existent, after Steven was injured at work, and then lost his job. By the end of the year, we had to move from our two-bedroom apartment into a much smaller one-bedroom, along with all our stuff, and the three animals. Instead of saving us money, we ended up owing our landlord for fees.
It seemed as if every time I turned around, 2010 was bitch-slapping me with another bit of bad news. I dreaded turning on the news, for fear I’d hear of another oil spill, hurricane or tornado, or god-forbid, a massive lay-off somewhere! Everyone I know has struggled through, either battling health issues, financial problems, or both. An optimists nightmare. I’m a glass half-full girl, but it was difficult to keep the glass from shattering during 2010.
But. (Yes, there is always a “but”)
Smooth seas do not make skillful sailors.
Which means that in even though many things were awful, there were also many learning moments. I’ve learned that even when I have pain, I don’t have to be one. (I can thank Sarah Palin & Kate Gosselin for that lesson, in part. Never thought I’d be thanking them for anything!)
I’ve learned that if you want to make your dreams come true, the first thing you have to do is wake up. For me, that means if I want to accomplish anything, I have to get dressed, not spend the day in my pajamas, and actually leave the apartment. They say that motivation doesn’t last. Well, neither does bathing – that’s why we do it daily. My sister’s advice about building a habit in fourteen days was one of the best things I learned all year! (Thanks, Jolene!)
There were also many good moments in 2010, and I would be wrong if I neglected to mention them. After almost a decade apart, my best friend, Michele and I were finally in the same place at the same time, and our visit was AWESOME! She’s been battling breast cancer up there in the frozen north, and I’ve been missing her down here, so just being together in our home town, with her entire family, her wonderful kids & husband, was the highlight of my year. For a while I was able to forget everything else and just be happy. We talked, laughed, ate, shopped, cried, ate, laughed, giggled, and sang old Barry Manilow songs. We even stood in front of the mirror & did each other’s hair, just like the old days! Sharing the beauty of western Colorado with Steven was fabulous, too!
My nephew Max started first grade, was in three plays this year, and as far as he’s concerned, he was the star of each! Max and Steven have become good friends, and every time I hear Maxie call out “Uncle Steven!” in that joyous voice, my heart lifts!
Max’s big sister, Hattie Jo, turned 17 this year, and is amazing! Hattie is the girl I’d want if I had a daughter–she’s smart, funny, polite, and talented, beautiful. She’s a lot like me. Hattie has been my friend since she was born, and I love watching her grow into such an incredible woman.
Anyway. I’m rambling. This rough year has helped me to see how important my loved ones are. Memories and moments. Lessons and…something else that starts with an “s”…lemons?
Sure. Lessons and lemons. Because when life gives you lemons, you make lemonade. And add some vodka. Then you have a party!!
I don’t make resolutions anymore– I learned a long time ago that I break those quicker than I break eggs for breakfast. I do set goals, and I’d like to share a few of them with you.
In 2011:
Re-read one favorite book a month, and write about it.
Make a scrapbook for my nephew Max.
Write a blog post twice a week.
Practice yoga daily.
Learn Vancouver’s bus system.
Volunteer.
Read more; watch television less.
Exercise more.
Express my gratitude daily.
So there you have it. My goals for 2011. I’m hoping this bright, shiny new year will be a better one for all of us, with little fear of shattering glass, or throwing those lemons at anybody’s head! Happy New Year, everyone!