“There’s so much more to a book than just reading.”  -Maurice Sendak

My life has revolved around books, in some way, shape, or form, for as long as I can remember, and so when I came across this quote today, it struck me as especially true. Books have been my self-medication, that drug I turn to, reading until the pain is numbed or the anger faded; my anchor, helping to keep me calm in stormy seas; my inspiration, showing me that the light at the end of the tunnel isn’t neccessarily a train (and if it is, teaching me how to avoid being run down!). Books continue to show me that I am not alone, and for that reason alone, I will never give up reading.

I am still fighting darkness, and this week, a book gave me some words I desperately needed. I began reading

Asylum: Hollywood Tales from My Great Depression: Brain Dis-Ease, Recovery, and Being My Mother’s Son

by Joe Pantoliano, the actor best known for his role on The Sopranos (although I remember him primarily as Guido in Risky Business, this is how old I am!). I haven’t made it past the introduction yet, and already, I’m reading parts of this book to family and friends, and writing a post about it. This man, who has struggled his entire life with depression, ADHD, and for years never knew what was really wrong, has put my feelings into words so eloquently, so perfectly, I can’t talk about it without crying. As he discusses his brain disease, and the battles against the stigma of mental illness, he writes this, which is where I began to bawl:

“Louis B Mayer once said ‘The most important thing about acting is sincerity….Once you learn to fake that, you got it made.’ That’s what my depression felt like- like I was faking it. Faking sincerity. Faking serenity. Faking life.” (p. 224) Faking it is what I’ve been doing my entire life, it seems, but Joe finally put it into words.

There is much, much more to this book, and I know I’ll have a whopper of a review for you all once I finish it. But right now, I just had to say that I have never been so glad I chose a book at the time I did.

By the way, I am beginning a new antidepressant tomorrow, (saw Dr Jeff today), and have a referral to a therapist, so with any luck, we’ll get some of this darkness cleared away for good. Or at least find a nice storage facility for it. 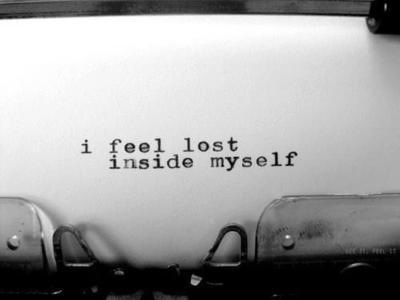 It’s been a rough week. Rollercoaster time. Not sure if it is the new meds, or just me, or all the crap going on around here, or a combination of all these things, but I’ve been sliding farther and farther into the darkness. Depression is something that I’ve lived with since I was very young– the first episode that I remember was the summer after my tenth birthday. I spent as much time as I could hiding out in the spare bedroom in our house, or in the treehouse, always with a book, and finally, after a couple of weeks, I started to feel like hanging out with the other kids, and kinda snapped out of it. That was one of the shortest episodes in my memory, and one of the easiest. I just thought all this weirdness was part of “my changing body,” a phrase that had been tossed around a lot that year. If that’s what it was, well, then my body is still changing, because the weirdness, that darkness, has never completely gone away.

I’ve been on different anti-depressant meds over the year. Prozac was the first they gave me, but it made me feel as if I was wrapped up in cotton batting. I couldn’t feel anything, good or bad; there were times even my senses were dulled, as if I were under water. I told the doc I’d rather feel lousy than not feel anything, because at least then I knew I was alive. She understood that. Next we tried a very low dose of Zoloft, and I stuck with that for a while. I was never sure if it actually did anything for my depression, but I know it affected my sex drive. Eliminated it. Antidepressants are the antiviagra.  Either way, after a couple of years I stopped taking it, since I seemed to be feeling better. (This was about the same time I was taking Keppra for my seizures, and it caused such obnoxious mood swings that I was ready to give up all meds.) Two and a half years ago, after Michele passed away, and all the other stuff that was happening around that time, I began having panic attacks again, something that hadn’t happened in over ten years. And, I could feel the darkness creeping up. So back came the Zoloft, and that’s what I’ve been on ever since.

Until the last month, when, in trying to figure out a solution for my TMJ, Dr Jeff added a small dosage of Valium to the mix, I’d been taking Flexeril to ease the TMJ pain at night, since the muscle relaxant stops me from grinding my teeth so much, and Valium had the same effect. Flexeril had a couple of obnoxious side effects–Sahara strength dry mouth, and, well, I’ll be polite and call it “blockage.” So we tried something else, and it worked, as well as having none of those side effects. It did make me a little sleepier than I am normally (because I’m not tired enough as it is), and I am afraid it may have made the darkness fall a little faster.

I found myself in tears at least twice a day, and on Monday, as I curled up on my bed, trying to take a nap, I scared myself. All these years, all this darkness, and for the first time, I thought how nice it would be to go to sleep and not wake up again. I started an inventory of the various meds in my room, and realized if I took them, I could make it happen. Honestly, this both terrified, and comforted me. If you’ve never been in this place, I don’t know if you can understand, but knowing that there is something there that would take away all this pain, for good, it is an amazingly soothing thought. Fortunately, I am not that far in the dark. I called my sister, told her how I was feeling. She said she’d be home as soon as she could, and told me to take my big basket of meds out to mom in the front room, which I did. Within minutes, our niece, Shelley, was at the house, and then Jolene arrived. Shelley understands more than anyone else. We sat in my room for the next few hours, talking, crying, and eventually laughing. The dark faded from ebony to charcoal to fog.

The fog bank is still hanging over me. Depression doesn’t just go away. I’m seeing the doctor again, and will be for the first time since college, going to therapy of some sort. Get these meds adjusted. Let some light in. There is a part of me that fights the urge to sleep all day, but I am fighting. As long as I’m fighting, I know I’ll be okay. When I’ve stopped fighting, well, then darkness will truly fall.

Like Loading...
I know that nearly everyone on the internet has written something about death and depression in the last week, and so I hesitated to write this. After all, I don’t want to be like everyone else, now do I? But frankly, the issues I’m writing about here have been on my mind for much longer than a week or two, and Robin Williams’ death only served to bring some of them to public attention again. I haven’t posted since the end of July, and these mental health issues are why.
I don’t feel much these days and it is causing me to do some big thinking. I’ve no problem with anger; getting angry is easy. But everything else is nearly impossible. I know what started this, but how to fix it is a whole other kettle of fish. I don’t trust emotions much any more, especially since I am not feeling that many of them, and when I do, they are bad. I’ve always let my heart, or my “gut” guide me, and for the most part, it’s gotten me in trouble. It started with Steven, and all the crap he put me through, and then got worse after Michele died. Her death, and especially her memorial service were very difficult for me; even though we knew she wasn’t going to make it. But that service just about killed me. I physically shut down, was ill for nearly days. I ended up spending most of the time I was in my home town in bed, rather than seeing people, which I regret. Losing her, my best friend for over 30 years, was devastating. I miss her every day.
I’m spending too much time wanting to sleep, hide in my room, or just vanish into my mind these days, and it worries me. They say if you’re worried about the state of your mental health, then there’s nothing to worry about, but I am not sure that’s true. I can worry about having a panic attack and still have one (or two or three); I can be nervous that I’ll not make it through the week without a slightly manic episode (I’ve not been diagnosed, but I likely have low-grade bipolar disorder 2) and still have one and end up spending money that I don’t have, or something else I shouldn’t do. I have been diagnosed with Major Depressive Disorder –also known as Clinical Depression– along with a type of seasonal affective disorder. I’m just a bunch of fun. I fight against demons of health, physical and mental, every day, and it’s getting really old. There are days I just feel like giving in, finding a nice looney bin and checking myself in. While I was watching television the other night, I was almost jealous of the guy in the mental health treatment center; he looked so content. Part of me just wants to climb inside my mind and hide forever. Of course, that is kind of what I am doing these days, isn’t it? I just hide in books, and movies, and internet crap.
I am scared of so much–things I was never afraid of before. Anxious and worried so much of the time. I want to stay in bed. When I think about going out, I start getting nervous, and if I think about it too long, the panic attack starts. My heart starts racing, I start tracing, I feel faint, can’t breathe, and my fingers get tingly. Then all I can do is close my eyes, take deep breaths, and hide somewhere private until it passes. It’s easier to stay in my room.
Reading Coleridge doesn’t help, though…