I promised some fanfiction recommendations, and here they are. I’ve read so many, but these are just a few that I truly liked. I’ll add more later. All of these are in the Harry Potter universe, and are mostly Drarry stories. I confess, I do like those slash stories! 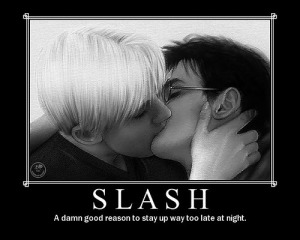 This seven volume series is extremely well written, and is available on slash perv’s website as a free pdf download. Beginning with that pivotal moment in Harry Potter and The Half-Blood Prince where Harry finds Draco crying in the bathroom; in this version, instead of hexing each other, they kiss, and from there, things escalate. Serious m/m slash, with lots of explicit sex: really, in nearly every chapter after the first couple, Harry & Draco are shagging, sometimes on a life-or-death basis. Some of the best long reads out there.

Ice cream.  After the war, and a very public breakup with Ginny, Harry has become a recluse. Draco is surprised when he runs into him scooping ice cream in a Muggle town on a summer afternoon.  I love ice cream (and sorbet, and gelato, and frozen yogurt…) and this story called out to me. It is yummy–but be warned, it’ll have you craving a frozen treat!

This is not a happy little fic, but it speaks to me.  Draco suffers seizures as an after-effect of something that happened during the war (we never find out what), and Harry helps him to find ways to cope. Turns out the war left Harry with some physical issues of his own. I am epileptic, and I seldom read anything that talks about seizures, simply because most writers cannot get the way seizure disorders affect a person right. This author does a spot-on job of describing both Draco’s seizures themselves (from his POV), and the way he feels after; I especially like the way the author describes his aura:

“Everything is the colour of plums, so dark and so opaque that Draco doesn’t know what happens next. He could be falling. He could be standing. He could be breaking his nose on the floor right this instant, this eternity, and bleeding over Harry’s floorboards—”

I confess to a liking for veela fics, and this is a bit different from most. After the war, a mistreated, caged and feral veela is discovered in a Death Eater safe house, and will only respond to Harry. Of course, this veela turns out to Draco. The Ministry wants to put him down, but Harry fights to save him.

Set during their seventh year at Hogwarts, this is a multi-chapter fiction that is canon through Goblet of Fire. Draco challenges Harry to a game of dare chess, and throughout the fiction, an actual game of chess is played. But is his ultimate goal love or betrayal?

This is a very popular fic, and even won some awards. The fan art for it is numerous, and includes a Lego version of one chapter, linked here.

The warning on this story states “This entire fic is one long conversation about sex.” And it’s the truth. When Draco spikes the wine with veritaserum, he and his husband Harry begin a conversation about their sexual fantasies and desires. This gets rather explicit, and hot. Hey, they aren’t all love stories, folks.

Draco breeds owls, Harry is an Auror, and an owl brings them together. The characterization in this love story is wonderful, and so is the romance!

Don’t go into this one expecting happy happy joy joy. In this story, Harry has been convinced by his past lovers that not only is he too ugly and lousy at sex to keep a wizard lover. He tries to get better, and compromises by wearing glamours, and finally, deciding to be content with one-night-stands with Muggles. Then along comes Draco, who messes everything up by wanting a relationship. This was a difficult story to read–Harry’s pain is palpable. But stick with it. It’s worth it.

This is an alternate universe fiction, and one of the best I’ve read. After his second year at Hogwarts, Harry realizes that things aren’t quite what they should be, and he decides to change them. He does this by becoming pro-active in his life, and making huge changes–including leaving Hogwarts, and England. It’s an interesting idea, exploring “what if?”