Yesterday, as I was flipping through television channels looking for something that wasn’t reality television, a talk show, or a teen angst drama, I found a station showing back-to-back episodes of a classic show, WKRP in Cincinnati. The show originally ran from 1978-1982, a sit-com about  the misadventures of the staff of a struggling fictional radio station in Cincinnati, Ohio. As we all know, the station’s new program director Andy Travis tries to turn around struggling radio station WKRP, despite the well-meaning efforts of the mostly incompetent staff: bumbling station manager Arthur Carlson, oily sales manager Herb Tarlek, and clueless news director Les Nessman. Rounding out the cast are super receptionist Jennifer Marlowe, enthusiastic junior employee Bailey Quarters, and spaced-out veteran disc jockey Dr. Johnny Fever, and the too-cool Venus Flytrap.

I hadn’t seen this show in years, but watching brought back memories, including one big one. As a 10-year-old-girl, watching this show for the first time, I saw the character Jennifer Marlowe, as played by Loni Anderson, as the epitome of all things classy, elegant and adult. I wanted to be her. She was smart, sexy, and in full control of her life. The people around her were in awe of her; she was the station’s highest paid employee. I was mesmerized. I wanted to be Jennifer, but not blonde.

For a long time, my guiding principle became “What would Jennifer Do?”  Would Jennifer wear that? This kept me from some HUGE fashion mistakes in the 80’s! At some point, I abandoned this philosophy, and chose something else. After watching  WKRP yesterday, I think I will return to my roots.

But I’m still not going blonde. 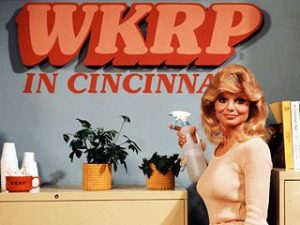