The Speed Of Dark by Elizabeth Moon 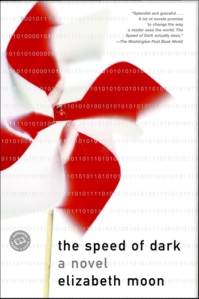 This is an amazing book with, what I felt to be, a heartbreaking ending.
Set in the not-so-distant future, a time when most disease and crime has been wiped out by genetic modification or computer chips planter in the brain, this is the story of Lou Arrandale, an autistic man. Lou is part of the middle generation of autists; his generation has been able to gain great strides in “normal” functioning due to training in early childhood with computers that helped to teach speech in ways that accommodated the sensory problems of the autistic brain. Lou and others his age hold high-functioning jobs, drive, and live alone, things that the autists of the older generation have not been able to do. The younger generation has benefited even more; genetic modifications in the womb have made autism for them only something they had before birth. Yet Lou and his friends still have many of the same social issues that face all autistic people: trouble with social skills, difficultly reading language and facial cues, and a tendency to be overly literal.
Told from Lou’s point of view, we see the world through his eyes, and it is often enlightening look. As Lou muses about God, or music, or the patterns of the stars, the world opens up. Lou has “normal” friends, and takes a class once a week in fencing, something that he enjoys. Yet, he doesn’t realize he is having fun until someone points out to him that he seems to be enjoying himself; he had only noticed that he was flushed and sweating.
The crux of the story is this: a new therapy is going into human trials, a therapy that may “cure” autism in adults. The pharmacological company that Lou works for has purchased this therapy, and his boss, who dislikes the special treatments the autistic workers get (things which allow them to function well in the workplace, such as a gym, music and Lou’s spinners at his desk), decides they will be told to receive this treatment or lose their jobs. Of course, this is illegal, and most of the team do not want the treatment.
Lou ponders what would happen if they change his brain. Will he be the same person? Like the same things as before? Will it matter? For example, he knows he likes peppers on his pizza and doesn’t like anchovies. If he has the treatment, will he suddenly like anchovies? And will it matter? It will matter to the anchovies, he decides, and to the man who sells anchovies.
I truly enjoyed this book, although I was disappointed with the ending. As I read, I was reminded of The Handmaid’s Tale, another novel set in a future that seems strange yet possible. Lou’s voice is so authentic, and so touching. This is definitely worth reading.

I am a disabled bookworm, pop culture junkie, and one of the laziest bloggers on earth. Between my whining about the pitfalls & making whoopee about the blessings of this amazing life, I may just toss some book reviews your way! View all posts by Jonna

3 thoughts on “Book Review: The Speed of Dark”