I Think I Love You by Allison Pearson 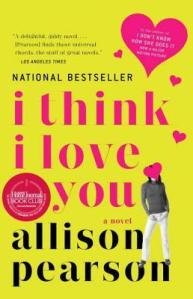 You’d expect a book about teens in love with David Cassidy to be light and full of air, a pop song of a novel, wouldn’t you? Well, that is not at all what the reader gets with this book. The story of Petra, who as a teenager in a small Welsh town, who along with her best friend Sharon, enters The Ultimate David Cassidy Quiz contest in hopes of winning a meting with their idol. Petra’s mother is staunchly against all forms of popular culture the family doesn’t even have a television and so Petra must hide her devotion to Cassidy, as well as her plans to see the man in concert in London. Years later, after her mother’s death, she discovers a letter in her mother’s things, telling her that she’d won that contest back in 1974; in a rush of grief, Petra calls the publishing company and demands her prize.

Intertwined with Petra’s story is that of Bill, a writer at the magazine sponsoring the contest, who in many senses becomes David Cassidy for the fans. He writes the letters the teenyboppers think are from David, using his poetic and musical heart to win their love. Bill even behaves like a prince at the concert where he and Petra unknowingly cross paths.

Years later, as adults, they cross paths again, as Bill’s publisher sends Petra and Sharon to Las Vegas to see David Cassidy, fulfilling their adolescent dreams. The plot sounds simple, but like a good pop song, there are layers. Upon layers. Love, anguish, teenage and adult heartbreak, music, poetry, and friendship. I didn’t expect it, but I am so glad I found it. Allison Pearson, I think I love you.